In our previous post, Death by PowerPoint: Can a Software Really Kill, we highlight some of the negative perceptions floating around about the well-known program.

Within the debates circulating on PowerPoint, the finger seems to be pointing at the software itself as the culprit responsible for monotony in the corporate world. Tufte is firm in his stance about how it’s the program that’s flawed – how else could so many people fall slave to the same blunders?

We argue, however, that the real issue stems from the status quo and what has become a standard in how to shape a message, or lack of message, to an audience. It has become so acceptable to make a presentation in a particular manner that every entry level employee just hops on the bandwagon without questioning the efficacy of the norm. It’s tough to break out of a routine if that’s the only thing you’ve ever known.

Here are 5 ways we believe users give PowerPoint its poor reputation.

1. Losing track of the audience by focusing too much on the task at hand

There are several advantages of being task-oriented. In fact, there are certain instances where such a mindset is absolutely essential, such as in engineering or architectural worlds where one’s ability to meet tight deadlines and organize minute details is a major factor determining a project’s success. Notably, some influential leaders described as being task-oriented include Frank Lloyd Wright and Gordon Moore.

However, in various articles about leadership, this characteristic is weighed directly against people orientation. Mandi Ehman summarizes perfectly the tendencies of task orientedindividuals vs. those who are people oriented. According to her, the former are concerned with to-do lists and completing what they set out to accomplish. The latter, by contrast, are more in tune with the needs of the people around them.

During PowerPoint presentations, it’s almost as if everybody turns into a manic task enthusiast! The goal turns into getting through every slide and bullet point that has been created for the occasion. As a consequence, presenters often turn a blind eye to the audience, which is the most important element in their presentation. 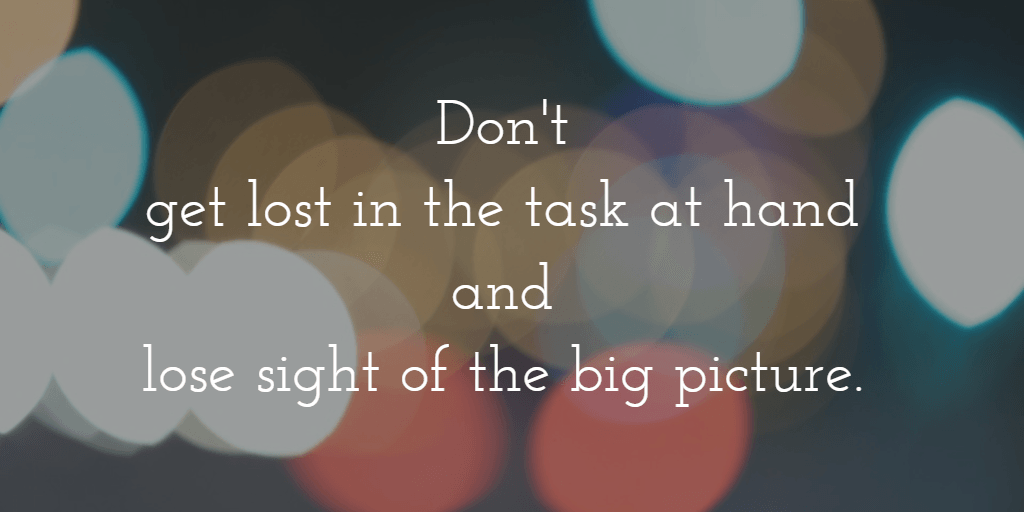 Perhaps it’s a question of practicality or pride. You didn’t spend the entire morning carefully animating sentences just to skip over them – that would be like throwing your precious time into the waste bin. Moreover, how could you deprive your audience of your insightful bullets? They’re all just so important to your invaluable message!

The key to any successful presentation is understanding who is in front of you. A colleague who lives for kittens probably wouldn’t mind watching 100 pictures of the little creatures flying by on a projected screen. In a different scenario, a busy senior manager may not even have time for you to open the .ppt file. It may be best to just give him or her the main concept of your action plan and leave the rest open to deliberation.

Learn to understand what on the agenda absolutely needs to get done and what can be modified or even put aside completely so that the big picture goal is achieved.

2. Using the presentation as a crutch rather than a prop

Gary Chapman, from the University of Texas, indicates 10 sins of using PowerPoint; using projected slides as a ‘crutch’ is at the top of the list.

Although there are some gifted speakers who are able to mesmerize with nothing more than the sound of their voices, visual aids can be wonderful components in a presentation. Visuals “can help to isolate ideas and clarify problems or relationships…the audience can grasp a plan, idea, or situation more quickly”, writes Meir Liraz in How to Deliver Powerful Presentations.

Patti Dobrowolski has even managed to build a successful career around the importance of imagery, including its power on the human mind, and has revolutionized goal setting.

The issue arises when one’s ‘visual imagery’ is actually a whirlwind of text and the speaker relies solely on what’s projected to deliver his or her message. The slides become a lifeline and the presenter believes genuinely that without them he or she will drown.

Here’s a slide we’ve surely all seen before. 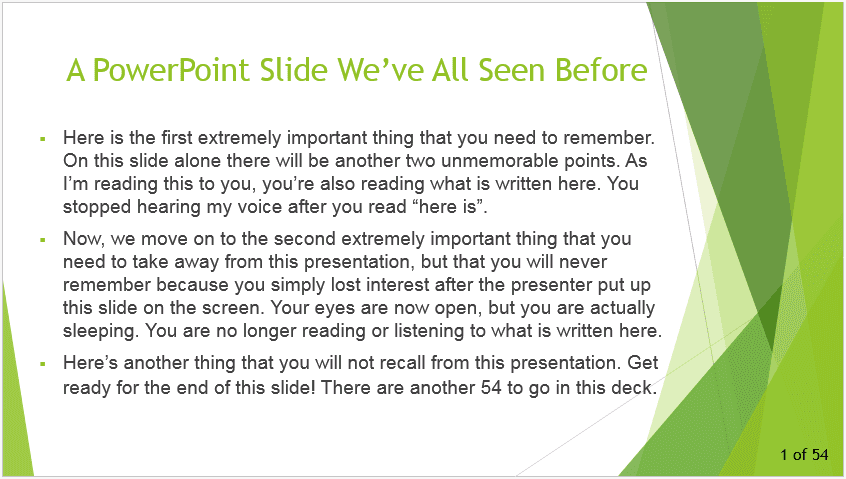 If used as it should be, a supplement during public speaking, PowerPoint can be a fantastic visual tool because it:

Eli Pariser shows us that it is possible to create an outstanding and useful PowerPoint presentation. Here’s an example of one of best slideshows we’ve seen.

3. Presenting an outline rather than a story

When a captivating story is told, there is typically a certain logic or natural flow of ideas. The narrative structure in writing is a method that describes this important sequencing.

There are instances when bullet points can be acceptable – we’ve evidently used them in this article. However, what’s posted sometimes in a presentation looks more like an outline or the result of a brainstorming session rather than an easy prompt aimed to help the audience follow the speaker’s narrative.

Some speakers fail to eloquently connect the stream of bullet points on each slide; their speech turns into a summary of numerous jumbled up ideas without impactfully telling a cohesive story. As a result, the audience leaves confused – overloaded with bits of information and questioning the ultimate idea the speaker was trying to convey in the presentation.

Freytag’s pyramid quite simply illustrates this concept of interconnecting ideas. Notice that the key elements of the story are joined together with continuous solid lines rather than dotted ones. 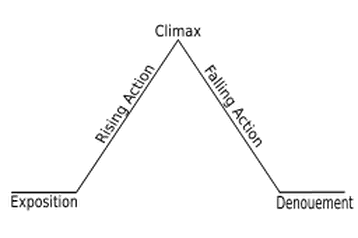 Keep your presentation alive; make sure to tell your story.

4. Thinking that PowerPoint makes you a better presenter

Unless there is an application that has some way of entering the brains of an audience in order to regularly release shots of dopamine, we’re unaware of any existing computer program that can make the delivery of an uninteresting speech interesting.

As aforementioned, PowerPoint can aid a presentation. However, it is highly unlikely that using a software can improve a person’s presentation skills. The ability to captivate an audience is something that stems from within – rather than any props that can be used throughout a delivery. Sue Gaulke simplifies what’s needed to make an audience really listen. 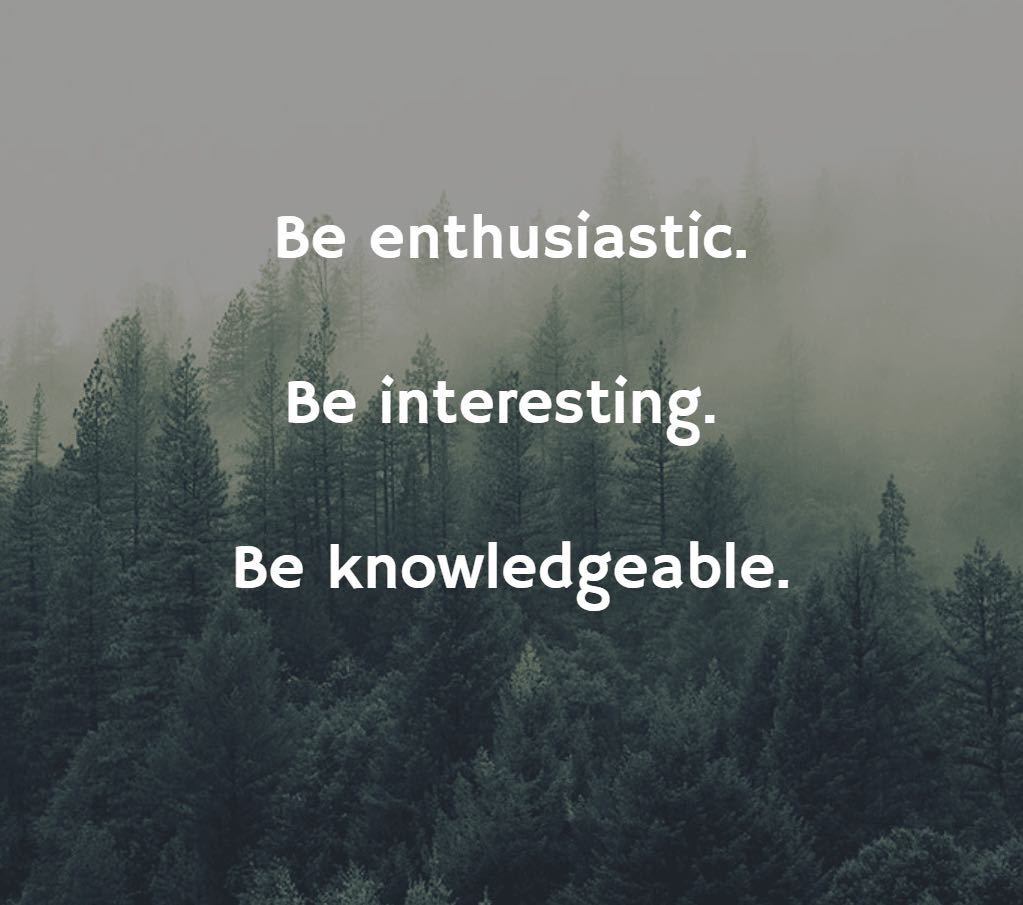 Be enthusiastic. Be interesting. Be knowledgeable.

If you’re weary about your presentation skills, there are a flood of great resources out there that can help.

Here are four of our favorite books on public speaking.

Talk Like TED: The 9 Public Speaking Secrets of the World’s Top Minds

The Quick And Easy Way To Effective Speaking

It’s Not What You Say, It’s The Way You Say It!: How to sell yourself when it really matters

Some people claim to hate PowerPoint because it just doesn’t do what they want it to do. Perhaps we need to be a tad more fair and remember that every software takes a minimal amount of time to master. For instance, Photoshop equates to hours of hair pulling for some while, after sufficient practice, others are pros.

While bashing PowerPoint, these skeptics praise trending programs like Prezi, arguing that it allows for a more impactful story. In some cases, this may be very true. PowerPoint isn’t something that should be used in every situation. The key is for a speaker to be selective.

Know the audience and the context of your presentation and make sure that the tools you use for delivery are the appropriate ones. Prezi is great if you’re looking for a loopy and fun way to present the sequence of your story  (see point 3). But, if you want to subtly incorporate imagery, PowerPoint can be just as effective for your needs.

Ultimately, take PowerPoint for what it is (see point 2) and consider the ways in which it can work for you. Don’t expect something from it that just isn’t there.

Perhaps you’ll be even a little happier. 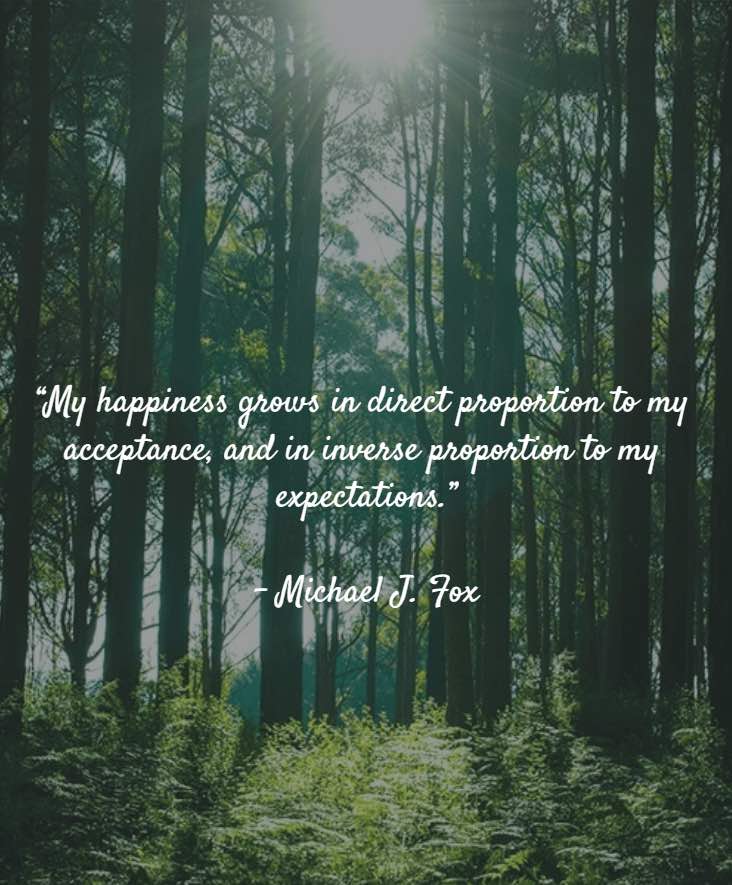 The LV Linguistics team loves writing about anything to do with business culture and enjoys finding ways to use this to help readers improve their English skills. In addition to articles related to the corporate world, entrepreneurship, work-life balance, and more, we’re working hard to create and share English vocabulary and grammar exercises that we hope can help you to excel in your language endeavors.